Increasingly employees are entering the workplace with gender identities and expressions that may be different from what we most frequently think of when discussing gender. While many transgender people identify on a binary scale – as either male or female – some do not and may instead refer to themselves as “genderqueer,” “gender fluid,” “non-binary” or other terms. These gender expansive identities are generally considered part of the greater transgender community.

Gender expansive employees – those that do not self-identify as male or female – often challenge existing understanding and norms around gender. These employees may opt to use gender expansive pronouns such as “they, them and theirs” instead of the gendered “he, him and his” or “she, her and hers.” In addition, gendered honorifics such as “Ms.” or “Mr.” may change to the more inclusive “Mx.”

Nothing may be more personal than the way in which people refer to us through our name and pronouns. Using a person’s chosen name and desired pronouns is a form of mutual respect and basic courtesy. Everyone deserves to have their self-ascribed name and pronouns respected in the workplace.

In the workplace, employees should have the option of articulating their preferred name and the way this is articulated may vary across settings -- formal vs. informal, email vs. in-person meetings, name badges, business cards and so on. But what about pronouns?

The experience of being misgendered can be hurtful, angering, and even distracting. The experience of accidentally misgendering someone can be embarrassing for both parties, creating tension and leading to communication breakdowns across teams and with customers. 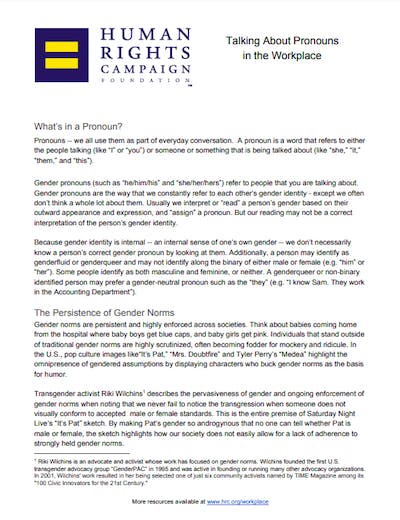 Talking about Pronouns in the Workplace