As of November 20, 2020, Transgender Day of Remembrance, at least 37 transgender and gender non-conforming people were victims of fatal violence — more than the Human Rights Campaign has recorded in any other year. This grim milestone proves what we have long known: this violence is an epidemic. Each one of the lives we lost was someone ripped from their family, their friends and their community by an act of senseless violence, often driven by bigotry and transphobia and inflamed by the rhetoric of those who oppose our progress.

Ending this epidemic requires addressing and eliminating anti-transgender stigma and discrimination across all facets of society and embracing people of all genders for who they are. Read the full report to learn how you can take action to help end the violence. 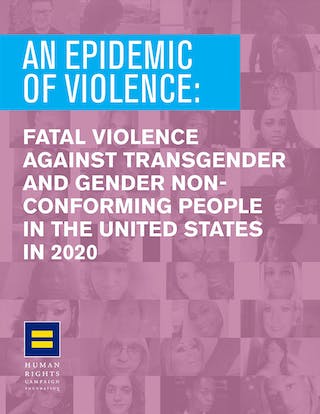 An Epidemic of Violence